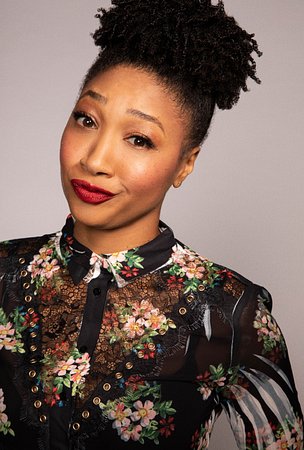 Yes, I'm a black woman with a black name and I LOVE IT! As a Stand-up Comic, Actor, Voice Actor, Writer, and Producer living in La La Land, I absolutely love creating funny, dynamic, memorable moments and characters! If you grew up in a dysfunctionally normal family in Flint, Michigan you would have lots of characters & Moments too! Yes, I said dysfunctionally. So it should come as no surprise that I'm known for my smiley face with a slick tongue. Nice but Sassy. I've had the opportunity to showcase my comedic talents live as a paid house Emcee & Regular Comic at Flappers Comedy Club in Burbank, at The Orleans Casino Las Vegas with legendary King of Comedy DL Hughley, the Hollywood Comedy Store, and Hollywood Improv to name a few. You may have watched me on the dramatic side recurring as Karen Jones on STARZ "Black Mafia Family" and Yvonne Byers in Freeform's "Good Trouble",  On the comedy side as Ms Griffin in Netflix's "Family Reunion", or heard my voice on animated series such as Nickelodeon's Loud House & The Casagrandes playing Georgia & Ian's purple elf friend in Pixar's Animated Feature "Onward".

I started my career in Animation Production after graduating from the College for Creative Studies in Detroit with a BFA in Animation/Digital Media. One day, I quit my lucrative career to become a broke black comedian and added a full blown dramtic acting career along the way. I can honestly say, I wouldn't change it for the world! The animation industry was amazing and definitely helped me become the storyteller I am today.

Overall, it's truly rewarding to be able to pull all my skills together and I hope my gift to gab, make you laugh, and create compelling moments will be a delightful contribution to your next project.